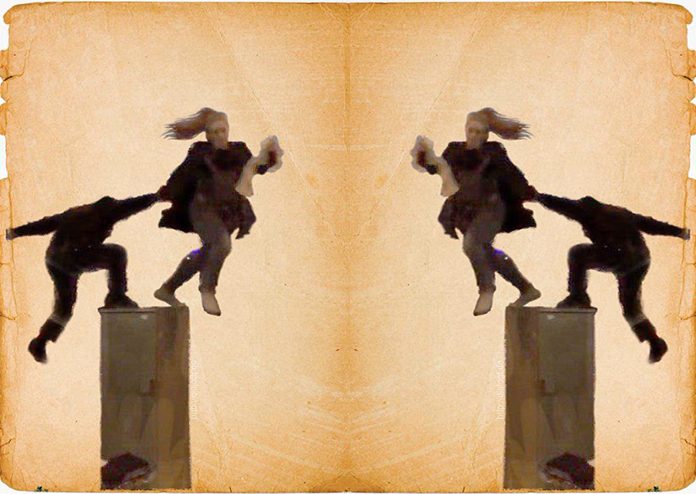 In a video posted on the Internet on February 22, 2018, in protest to forced veil, a woman climbs on a power supply platform in Enghelab Street and in silence waves her headscarf like a flag.

After she refuses to come down, the police officer, kicks her down from about two meters high platform.

The Iranian Human Rights Campaign, while confirming the report, quoted an eyewitness: “The protesting woman’s foot was injured after being thrown off the podium by law enforcement officers.  Despite passersby’s attempt to help her flee, she was arrested by the police.”

An eyewitness at the site told campaign, “This happened at six o’clock in the afternoon of February 22, 2018 on Enghelab Street and in a place where a number of women who are known as the Girls of Enghelab Street or Enghelab Girls also did same”

The Eyewitness told campaign, that he was on the scene by accident and does not know anything about the identity of the protesting woman . He also said that the woman’s foot was injured after being thrown from the platform. “When she was brutally thrown down by the officer, the crowd was very shocked, the girl was on the ground for few minutes and then could hardly got up. The crowd quickly surrounded her and did not allow the police to approach her, we took a taxi and she got into taxi and left, but the officers followed her. I did not follow her, but later they said that police stopped the car at the next traffic light and arrested her. “

In a video taken by an eyewitness that was originally posted on Twitter; when police ordered her to come down the platform, the protesting woman asked the police several times what her crime was. Several local women and men were encouraging the woman, and talking about how they can help her when she fell.

The policeman, after throwing the protesting woman, addressing the crowd, said: “If you have a gonad come forward,” a defamatory and anti-woman term that suggests having a testicle as a sign of courage, and it’s only monopolized by men.

Another video that also has been published, shows that number of people passing by gathered around the car that had protesting woman in it and were trying to prevent her arrest by talking and pleading to the police.

Iran’s police violence and shooting against peaceful protests are not new, but the intensity of violence committed in these cases and the very nonviolent nature of women’s protest shows that the police and security forces in Iran do not much differ between peaceful and non-peaceful protest.

Since the start of the new round of Iranian women’s protests against forced hijab in early December 2017, many have been arrested.  Vida Movahed, Narges Hosseini, Azam Jangvari and about thirty others have been arrested in connection with the movement of the Enghelab Girls and the White Wednesday campaign.

There is no news about the fate and even the name of the large number of women who’s  protests’ videos were posted on the Internet.  It is not yet known whether they were arrested or under what circumstances they are in. In particular, given the open nature of these protests and the existence of films and pictures of them, security and judicial systems have little difficulty in identifying and arresting these women protesters.

In connection with these protests, the judiciary has only hinted on frothy arrest, without providing the names, accusations, and whereabouts of the defendants.

After Vida Movahed and Nargis Hosseini, Azam Jangvari one of the protesters against the forced veil, was arrested on February 15, 2018 with similar violence. Before her arrest, she wrote on Instagram that she did this move without connecting with the inside or outside, and to protest against forced hijab and ending anti-women laws and accepting its consequences.

Azam Jangvari in her last Instagram post with Hashtag(#)  Enghelab Girls wrote, she started her political activity with one of the Iran reformist parties, but she was tired and concluded that it was time to act: “I started my political activities in the area of women and with the Reformist Women’s Assembly and the Kargozaran party in hope of some reform, I got tired, it seems talk is not enough and must act. ” Although news of Azam Jangvari  release has been  published on the Internet, but his family and his relatives have been silent about it, and it is not clear whether she was released or not.

Shaprak Shajarizadeh another woman protester on forced hijab was also arrested on February 21, 2018 in Ghaitarieh, Tehran and so far no news of her condition has been published.

Since the beginning of the Iranian women’s protests against forced hijab, in addition to arresting and using violence, the authorities have reacted by issuing heavy bail, threats, claiming these protesters of having connection to outside of the country, and even guarding the platforms in Enghelab street to prevent Iranian revolutionary women from protesting. An attempt that has so far been fruitless.

In the latest such moves, Iranian police welded metal and added metal sheets to the electric platforms in Enghelab street, to make it impossible to climb, an act that has been confronted with humor and ridicule by Iranian Internet users.

The fall of the protesting woman manifests the collapse of the legitimacy of the government’s policeman.

Police extreme violence against a citizen peaceful protest has resulted in the frequent reactions of Iranian Internet users. Atefeh Nabavi, a political activist and former political prisoner, published picture of a moment when the protesting women was falling on her twitter account and wrote “looking for reason for the rage and anger of the Iranian people? That’s the reason! The most absurd form of violence against the claim of a basic right