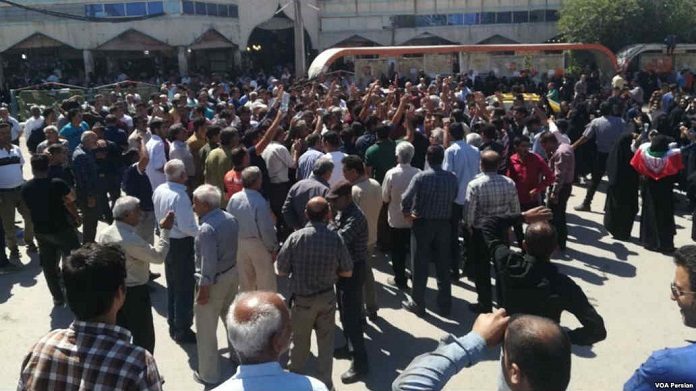 Hundreds of people were arrested by security forces following protests in March 2018 in Ahvaz and other cities of Khuzestan, which was held in protest against the Islamic Republic’s network program ‘The Red Hat show (Kolah Ghermezy)’. According to reports from Ahvazi Arab Human Rights activists, hundreds of Ahvazi Arab citizens are still in uncertain conditions without access to lawyer.

Three Iranian security agencies, including police forces, Revolutionary Guard Intelligence, and the Ministry of Intelligence, have been involved in the arrest of Arab citizens. The number of involved agencies with the arrests have made it difficult to collect statistics and authenticate all detainees.

During the protests and the days after, security forces arrested many people. No official figures are available on the number of detainees, but some human rights activists have reported more than 500 Arab citizens and activists were arrested.

Among the detainees, there are many children under the age of eighteen and a number of civil activists, Arab writers and students who have not participated in the protests.

An informed source about how Arab citizens in Khuzestan were arrested told human rights organizations: “Most of the people were arrested at their home and in a nightly law enforcement offices raid. In some cases, the officers arrested all the men in the family.  Some were arrested at cafes and Arab activist cultural hangouts locations and taken by bus and van. In one case I was witnessing the arrest of 15 people in a cafe in Ahvaz and some of them did not participated in protests, but since the owner of the cafe is a famous Arab activist and the cafe is also a hangout, they arrested everyone and took them. “

Many detainees’ families have gathered in front of the Shiban Prison, the Governor office, the Assembly of Experts members’ offices, and members of congress offices, and objected to the no information regarding their detained children status.

Jawad Albaji, Ahvaz representative, told the Etemad newspaper that the number of detainees are 150.

He added: “The fact is that all the gatherings and protests were civil and no destruction was committed. All the protests are in vain and completely controlled. The protesters did not intend to bring the country into an unrest or to cause damage to the system. “

It was also reported earlier that hundreds of detainees from the Ahwaz demonstrations are in poor condition in Shiban Prison. They are kept in a separate part of prison and in 10 quarantine sections, each containing 7 cells, and in each cell, several detainees are in a difficult situation, and are prohibited from communicating with other prisoners. No visits have been allowed.