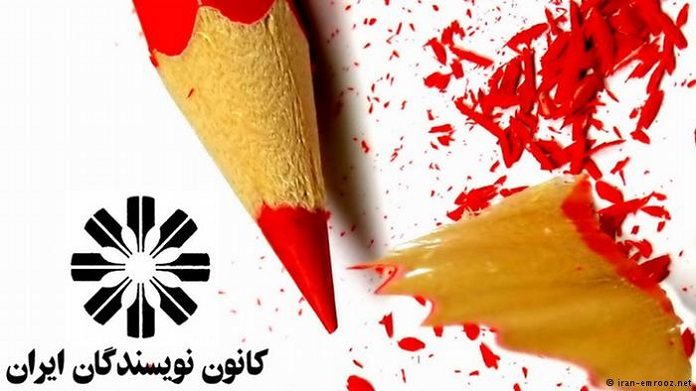 Following the seize of the Iranian Writers’ Association’s books by security forces on Sunday June 17th, 2018, the Association Board of Directors, in a statement condemned the action on Monday, June 18th, 2018. This statement describes the agents encounter as “confiscation and looting”. Part of the statement reads: “The Iranian Writers’ Association condemns the tyrannical, abusive, inhumane and repressive actions and demands the return of this collection of books as well as other properties that were looted during the assault on May 25th, 2018.”

The books were to be delivered by a motorist to an Association’s member. But just when the books were delivered, the security forces showed up and seized the books after showing the confiscation order and filming the moment by moment of the scene and counting down the books. The number of books that have been looted is 30 of the 4-volume series that have been published and printed over the course of a year of research and continuous tireless collection of members of the 50th anniversary commission. The titles of this collection are “Activities”, “The Suppression Calendar (Abuse, Prison, Murder)”, “The Organizers of the Writers Association of Iran, “Dialogues and Writings”, “Statements, Notices, Messages and Letters,” and finally “Association Posters” For various occasions.

It is clear that, the Islamic Republic security forces, with these predatory repressions, want to prevent the association members of their activities and the spread of the association goals and ideas. On the one hand, in the process of frame-up cases for social, political and cultural activists, they try to frame-up cases for the Association activists and thereby prevent them from activism. The filming of the books delivery scene as well getting the delivery person signature are with the same purpose of building frame-up cases. By looting and confiscating the Association’s properties, they deprived the members of the association of their efforts and dedication, to deprive the people of their access to the Association and their resistance to censorship and the struggle for freedom of expression.

The Iranian Writers’ Association condemns the authoritarian, predatory, and inhumane acts of oppressive and calls for the extradition of this book collection as well as other properties that were stolen during the assault on Friday May 25th, 2018. Obviously, the Board of Directors will continue to operate more robustly and firmly than ever, despite all the crackdowns and pressures.

The campaign had previously reported that, On Friday, May 25th, 2018, the celebration of the 50th anniversary of the Iranian Writers’ Association was prevented by the security forces. Reza Khandan Mahabadi, a writer and member of the Board of Directors of the Iranian Writers’ Association, said in a statement to Radio Farhang, “before the fifty years anniversary celebration started, the police invaded the venue of the festival and prevented the meeting from being held, while at the same time, the association location was searched and some of the association items were seized”.

The Iranian Writers’ Association was formed in April of 1968, with the purpose of combating censorship. The members of the association have faced with oppression, execution, and murder at different times of Iranian history, both during Pahlavi times and during the Islamic Republic, especially in the 1980s and 1990s.