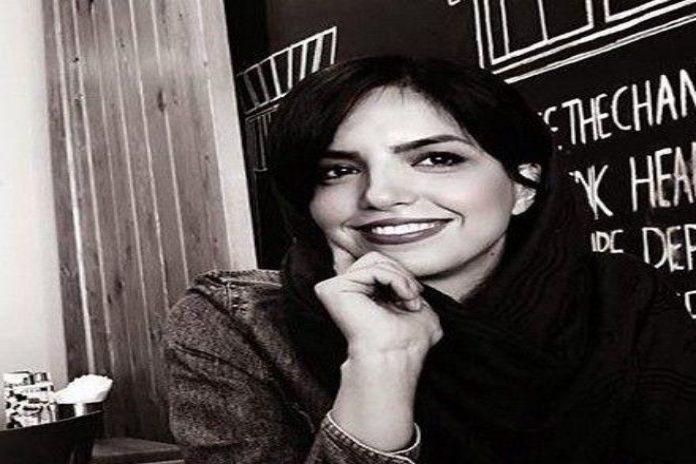 Azam Jangravi, a Girls of Enghelab Street, was sentenced to 3 years in prison in prime court, and most of the imprisonment is suspended.

Abbas Jafari Dolatabadi, Tehran Public and Revolutionary Prosecutor, has objected to this ruling, and believes that all sentences must be definitive and impartial.

Azam Jangravi, one of the protesters against the forced veil, on February 15, 2018, in Enghelab Street, similar to other Girls of Enghelab Street, removed her scarf and attach it to a stick, and waved it to the crowd as a protest to forced hijab. Released videos showed a police officer throwing her down from the top of the platform on which she was standing. She was arrested on the same day and case was filed against her.

Before her arrest, she wrote on Instagram that she participated in this movement without connecting with the inside or outside, and to protest against forced hijab and to end anti-women laws and accepted its consequences.

Azam Jangravi, in her last Instagram post with Hashtag(#)  Enghelab Girls wrote, she started her political activity with one of the Iran reformist parties, but she was tired and concluded that it was time to act: “I started my political activities in the area of women and with the Reformist Women’s Assembly and the Kargozaran party in hope of some reform, I got tired, it seems talk is not enough and it was time to act. “

Mohammad Mosaed, a Twitter user, in a tweet that has been repeatedly republished, with an echo of a Tehran police chief’s statement about the police self-restraint wrote: “We could have attacked the girl with RPG, but we just suffice to throw her down.” The police chief of Tehran recently regarding the violent clash with Dervishes protests, praised the police with saying that the police could attack the protesters with RPJ, but with self-restraint did not do it.

Azam Jangravi, born in 1982 in Tehran, holds a master degree in Artificial Intelligence and Robotics. On February 15, 2018, at Khiaban Enghelab (Revelation Street), she stood on the same platform that Vida Movahedi stood and removed her veil. She was thrown by the police and arrested on the same day. She is the mother of a little girl.

Of the dozens of women who have been arrested in recent months for protesting the forced veil and known as the Girls of Revolution Street (Girls of Enghelab Street), at least the names of six women, named Hamraz Sadeghi, Maryam Shariatmadari, Shaprak Shajarizadeh, Narges Hosseini, Azam Jangravi and Vida Movahed, have been identified.

Since the beginning of the Iranian women’s protests against forced hijab, in addition to arresting and using violence, the authorities have reacted by issuing heavy bail, threats, claiming these protesters of having connection to outside of the country, and even guarding the platforms in Enghelab street to prevent Iranian revolutionary women from protesting. An attempt that has so far been fruitless.