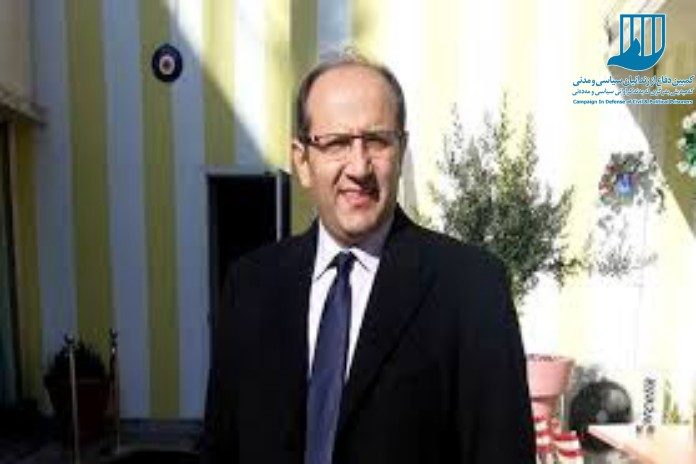 Hossein Ahmadiniaz, a lawyer, was arrested after pursuing case of Ramin Hosseinpanahi, a political prisoner sentenced to death.

According to the Campaign for the Defense of Political and Civil Prisoners, Hussein Ahmadiniaz, a defense attorney for Ramin Hosseinpanahi, who earlier had been threatened several times by the security authorities, was arrested on Sunday morning of August 15th, 2018, after referring to Sanandaj City Revolutionary Court of to follow up on Ramin Hosseinpanahi’s case.

Prior to this, Hossein Ahmadiniaz, defense lawyer for Ramin Hosseinpanahi, a political prisoner sentenced to death, was summoned to Branch 4 of the Islamic Revolutionary Public Prosecutor’s Office of Sanandaj to continue violating his client’s rights and creating unlawful pressures on Ramin Hosseinpanahi.

The case was filed by the Ministry of Intelligence in a lawsuit against Hossein Ahmadiniaz for interviews and legal follow-ups of Ramin Hosseinpanahi’s rights, and on Friday, July 6th, 2018, the lawyer was informed of the case.

It is worth mentioning that security agencies have threatened Hossein Ahmadiniaz several times to stop following up on his client’s rights.

Hussein Ahmadiniaz, who also is a lawyer to Dokhtaran Shinabadi’s case, recently have just returned to Iran from a European trip.

Zaniar Ahmadiniaz, an accounting student at Tehran Azad University, has been sentenced to eight years in prison.

In recent years, the Islamic Republic of Iran has arrested many lawyers (especially lawyers active in the field of human rights), including the Nasrin Sotoudeh’s imprisonment and detention orders, Mohammad Najafi, Mostafa Daneshjou and Abdolfattah Soltani.

It should be noted that the legislator must ensure the safety of the lawyers and their business, and their human rights activities and defense, should not be used for their arrest.

Amnesty International has repeatedly warned against arresting lawyers in Iran, and in various statements, called to Iranian authorities to release the detained lawyers such as Nasrin Sotoudeh, Zainab Taheri, Abdolfattah Soltani, and others.