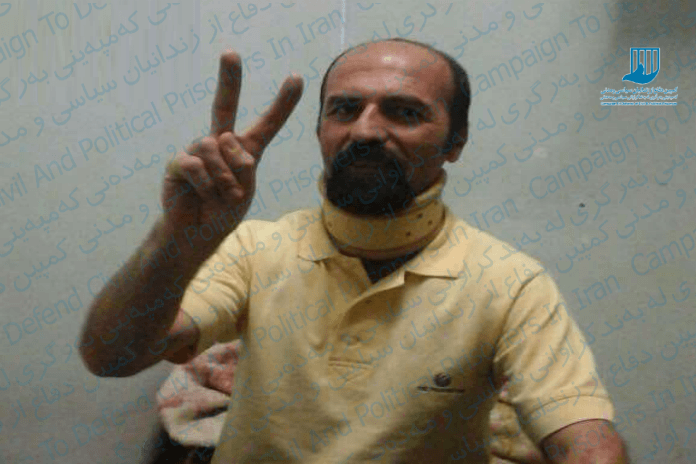 Behnam Ibrahimzadeh, labor activist, was arrested by security forces around Kermanshah on Friday August 17TH, 2018, and moved to an unknown location.

According to the Campaign for the Defense of Political and Civil Prisoners, the family of Behnam Ibrahimzadeh learned about his arrest by security forces around Kermanshah on August 20th, 2018 after frequent searches, and went to Kermanshah to track the detention location and the reason for the arrest of the activist.

An informant source close to Behnam Ibrahimzadeh said, “After a few days of no news and no answer to calls, Mr. Ibrahimzadeh’s family learned about his arrest by Kermanshah Intelligence Agency Security forces. Mr. Ibrahimzadeh traveled to Kermanshah to help the people who were affected by the earthquake.”

Until this report, there was no accurate information about the place of detention or the reason for the arrest of this labor activists. Some news sources have confirmed that Behnam Ibrahimzadeh has been detained along with several other civil activists on Friday, but the identities of other detainees are not known by the campaign.

Behnam Ibrahimzadeh, after being presented with the people of Sar-e-Pol-i Zahab in Rijab on August 7th, 2018, was followed by a plainclothes agent of the district called Farman Gholami. This agent sought to identify and arrest him for insulting the leadership and provoking people by pressuring the earthquake families that Mr. Ibrahimzadeh helped them with.

It should be noted that Behnam Ibrahimzadeh, a worker activist and a member of the “Street Children Defense Conservation Society” born in 1975 in Oshnoueh city and residing in Tehran, was detained in June 2010 due to activities related to workers’ rights and child labor rights. After four months of interrogation in solitary confinement in Evin Prison, he was transferred to Ward 350 of the prison, and in December 2010, he was sentenced to 20 years Imprisonment in branch no.15 of the Tehran Revolutionary Court, which later was reduced to five years in Tehran’s appeal court.

Behnam Ibrahimzadeh again faced another case while he was serving his term of imprisonment. In 2014, he was sentenced to nine years and four months imprisonment with charges such as “propaganda against the regime”, “assembly, collusion, and action against national security”, and “use of satellite equipment and maintenance”. The sentence was reduced to 7 years, 10 months, and 15 days imprisonment and a 450 thousand tomans fine

Finally, on May 1st, 2017, this labor activist was released after serving 7 years in Evin Prison and Rajai Shahr prison in Karaj.