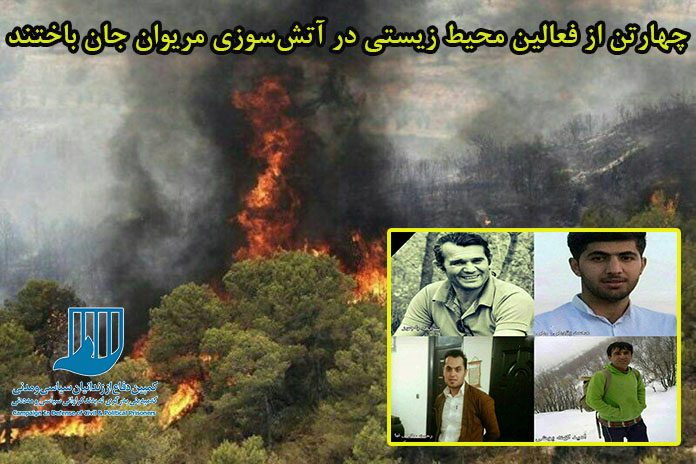 Four people died and two others were injured as a result of the fire in parts of the Marivan forests. The identity of one of the victims of the incident is Sharif Bajaur, as an environmental activist and member of the Board of the Green Society of Chia (Anjoman Sabz Chia).

According to the Campaign for the Defense of Political and Civil Prisoners, today, August 25th, 2018, four citizens including Sharif Bajaur, son of Bayazid, Omid Hosseinzadeh, son of Ahmad who is a member of the Green Society of Chia, two members of the Marivan Environmental Bureau including both Mohammad Pajouhei, son of Ahmad, and Rahmat Hakiminia, son of Amin, died in the fire in parts of the Marivan forests after coming to help control the fire.

During the incident, two other people were injured, Mokhtar Aminnejad, 33, son of Abu Bakr, and Mohammad Moradovisi, 57, son of Ahmed. Mohammad Moradvisi was sent to Sanandaj by helicopter for severe burns.

A member of the Marivan resident told the Campaign: “On the body of Omid Husseinzadeh and Sharif Bajaur, wound and injury from bomb and landmine was seen, and the governor of Marivan has been prevented from transferring their bodies to medical examiner.”

Some eyewitnesses have reported the slowdown in the Internet and the presence of a large number of security forces in the city of Marivan, telling the campaign’s reporter: “After the news of the loss of these activists and people protesting against government, the speed of the Internet has decreased sharply and the city atmosphere became militarized. “

Marivan citizens, as well as civil, political, and environmental activists residing in Marivan have been objecting to the government actions including “deliberate burning of oak forests and casual bombing on the pretext of the presence of Kurdish opposition parties against the government and land mining on the pretext of confronting the arrival of Pishmerga forces and also under the pretext the opposition to drug traffickers by the Revolutionary Guards”. Following the news of the four activists, citizens have been protesting in the streets of Marivan objecting the Revolutionary Guards and the Ministry of Intelligence of the Islamic Republic of Iran this action.

The Ministry of Intelligence and the Revolutionary Guard Corps have been attempting to assassinate these individuals during the past years by threatening some civil and political activists.

The latest case is the assassination of Ighbal Moradi, the father of Zaneyar Moradi, a prisoner sentenced to death.

Over recent years, members of the Green Chia Association have been under pressure and occasionally arrested by security forces and the judiciary for their activities.

The Green Community of Chia was founded in 2002 by a number of Marivan environmental activists and received official permission and from the Marivan government office to continue its activities after six years, in 2008. The Society won the National Environmental Award in 2014, in recognition of its efforts to promote environmental activities, the culture of avoiding hunting, and the effective activities to curb the fires in Zagros forests.