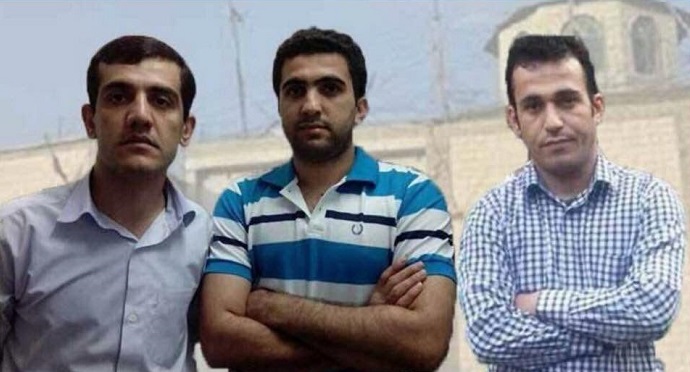 Zanyar and Loghman Moradi, two political prisoners who were transferred to Rajai Shahr Prison to execute the death sentence since Wednesday, September 5th, 2018, in protest their situation, started a dry hunger strike.

Also, there is no news of situation of Ramin Huosseinpanahi, another Kurdish political prisoner, detained in Rajai Shahr Prison, since Wednesday. The family has no information of his condition.

According to the Campaign for the Defense of Political and Civil Prisoners, Zanyar and Loghman Moradi, two imprisoned prisoners sentenced to death, who were transferred to Rajai Shahr Prison in Section 8 of the Revolutionary Guards’ Information Service on Wednesday, September 5th, 2018, in protest to this transfer and the possibility of executing their death sentence, started a dry hunger strike.

A source close to the family of these political prisoners told the Campaign: “In a brief visit that Diar Muradi had with his brother Zanyar, they were told that if these two prisoners are back to prison general ward by Saturday September 8th, 2018, at  ۲ PM, they will not be executed, but Zanyar Moradi has told his brother that most likely, they will execute their death sentence tonight. “

The lawyer regarding the socializing about the two Kurdish political prisoners told the Campaign, ” Official authorities did not informed me about my clients Zanyar and Loghman Moradi transfer and I had to pass on the information on this matter. Now, without prisoner authority’s letter and legal permission, I do not have permission to meet with my clients. It is Friday and offices are closed in Iran, and I am not able to obtain visitation legal permission. I learned from the family of these two young prisoners that they had moved Zanyar and Loghman a few days ago. “

Also, there is no news of Ramin Hosseinpanahi, since Wednesday, September 5th, 2018. The family of this political prisoner are worried about their son’s condition.

Amjad Hosseinpanahi, brother of Ramin Hosseinpanahi, another prisoner sentenced to death in Rajai Shahr prison in Karaj, during a conversation with the campaign’s reporter said, “We do not have any news of Ramin’s status since Wednesday morning of September 5th, 2018.”

Amjad Hosseinpanahi regarding his brother situation told the Campaign, “The family and Ramin’s lawyers, despite continuous follow up, have not obtained any news about our brother, and so far, no authorities or agencies have given them a clear answer. We are worried that Ramin will be secretly executed “.

Zanyar and Loghman Moradi were arrested on August 3rd, and 4th, 2009, by security forces in Marivan, Kurdistan province, and were interrogated and tortured physically and mentally for about 9 months in the Sanandaj Information Office.

They were eventually transferred to “209th Section of Evin Prison”. On December 22nd, 2010, after nearly a month and a half without visitation right nor any contact with family members, in Revolutionary Court branches 15, headed by Judge Salavati, with forced and fabricated confession, they were sentenced to death on charges of “moharebeh through membership in one of the Kurdish parties” and ” involvement in the murder of the son of Marivan’s Friday-Prayers Imam”.

After these two prisoners protested the sentences, on July 9th, 2011, the Supreme Court approved the verdict and one day later it was communicated to the Rajai Shahr Prison authorities.

Ramin Hosseinpanahi, a political activist, was arrested on June 23th, 2017. He was transferred to the Sanandaj Central Prison after 200 days of solitary confinement and going through extreme physical and mental torture. Ramin was sentenced to death in Sanandaj Revolutionary Court Branch One, on January 15th, 2018. The verdict was reaffirmed at Branch 39 of the Supreme Court in Qom, on April 11th, 2018.
Ramin Hosseinpanahi ‘s death sentence was issued even though he denied all the alleged charges, such as participation in the armed conflict. The lawyer of the Kurdish political prisoner also considered the sentence unexpected and unjust.