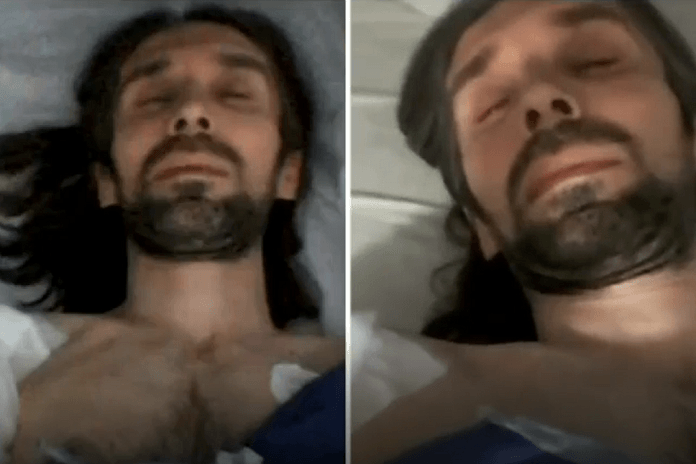 Arash Sadeghi, a civil activist detained in Ward 12 of Rajai Shahr prison in Karaj, earlier was sent to the hospital for medical treatment, and was returned to prison without adequate medical treatment. “He is in a very critical condition.”

According to the Campaign for the Defense of Political and Civil Prisoners, Arash Sadeghi, a civil activist detained in the of Rajai Shahr prison in Karaj, is suffering from severe infection, due to lack of essential medical treatment after being transferred to a hospital and being returned to jail. He was sent to the hospital on Saturday, September 22nd, 2018, but returned to prison without receiving appropriate medical treatment.

An informed source told campaign: “Arash was scheduled to be sent to the hospital’s cancer department, but, despite the doctor’s emphasis that he has to be in the hospital before 12:00, sending Arash was delayed again. “

The source continued: “Since Arash does not have access to a specialist, he was sent to a general practitioner. The general doctor states that due to lack of hospital stay, which according to the doctor’s instructions, he supposed to be monitored in hospital for at least 25 days after surgery, the site of his wounds was severely infected. The physician, in addition to oral antibiotics cephalexin, which Arash used after surgery, prescribed 12 heavy antibiotic injections to be injected twice daily.

At the end, the source said: “Arash Sadeghi was transfered to the hospital outside the prison by the order of Rostami Prison Instructor, Gholam Reza Ziaei Prison Head and Rajai Shahr Prison Head, Maghsoud Zulfali, with inhuman and degrading treatment in handcuff and leg shackle.”

Arash Sadeghi, a human rights activist detained in Rajai Shahr Prison in Karaj, was transferred to the hospital in late July to check his medical condition and on Saturday, August 25th, 2018, doctors diagnosed his cancer.

Arash Sadeghi was transferred to Imam Khomeini Hospital on Tuesday, September 11th, 2018, and despite the order of the medical practitioner, he was returned to prison on Saturday, September 15h, 2018

A source close to Mr. Sadeghi’s family in a conversation with the campaign’s reporter said: “Arash was returned to prison after his tumor was removed and without adequate rest, while his condition was not good, and definite treatment was not identified. Because the tumor needs to be biopsied so that they could replace prosthetics with other treatments. “

It should be noted that Arash Sadeghi was abandoned in solitary confinement with the injuries during the interrogation period that led to a broken arm and leg. It seems due to the excessive and abnormal cell proliferation in the fracture area for the past one and half year, severe pain was caused, and he does not have any food intake due to long-term hunger strikes and his current weight is about 43 kilos.

Arash Sadeghi, who is infected with acute ulcerative colitis and is likely to develop colon cancer due to lack of medical attention, is now at risk of developing another cancer.

He has suffered from various illnesses because of a long and continuous hunger strikes. He is suffering from respiratory discomfort and digestive, stomach and intestines diseases. His kidney has been said to have been seriously damaged by constant hunger strike and lack of medical attention.

The human rights activist was arrested by the Revolutionary Guard in April 2014 and was released after 6 months imprisonment on 600 million Tomans bail. During his temporarily released from prison, the agents raided his home to arrest him which caused his mom a stroke and eventually she died.

Arash Sadeghi was arrested in May, 2016, for last time.  In October 2017, he started his hunger strike for 70 days, and on September 2017, he was transferred to Rajai Shahr prison in Karaj from Evin Prison. This political prisoner recently launched a new hunger strike on Friday, February 25th, 2018, in protest to his wife, Golrokh Iraee, and Atena Daemi transfer from Evin Prison to Gharchak Prison (Shahr-e- re) with beating and insults. He ended his hunger strike due to severe physical weakness and respect for his inmate friends’ request.