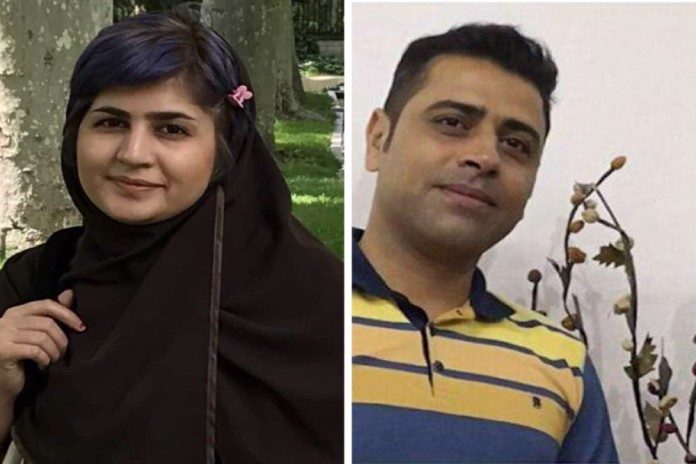 Ismail Bakhshi and Sepideh Gholiyan, in connection with the protests of Haft Tapeh Sugar Cane workers in Ahvaz, were arrested on November 18th, and are now being interrogated and in critical condition.

The families of the two detainees have reported that they “met them while the effects of the beatings on their bodies were evident.”

According to the Haft Tapeh Sugar Cane Syndicate Telegram Channel, detained workers’ families were able to have a short visit with their loved ones after several requests, as well as the legal follow-up of the lawyers. During the visit, they found that both of them had been severely beaten and subject to intense physical and psychological abuse.

The Haft Tapeh Sugar Cane Syndicate has issued a statement in which it condemned the physical and mental conditions created for Ismail Bakhshi and Sepideh Gholiyan, calling for their immediate and unconditional release.

“According to reports, Ismail Bakhshi and Sepideh Gholiyan have been physically beaten and are in a very serious condition,” the statement says.

During the family visit, they were not even able to recognize the time when they’ve been around for a day, and they’re still under pressure and kept in solitary confinement. Sepideh Gholiyan clearly became very skinny, and when her mother hugged her, her body felt pain.

Also, the physical condition of Ismail is seen as very seriously and there is still bruising on his forehead due to beatings.

According to news sources and the visitor’s observations, Ismail Bakhshi was in serious condition in terms of his physical condition and after hearing the news of his support by people, a smile painted his suffering face.

“By condemning the severe physical and mental conditions created for Ismail Bakhshi and Sepideh Gholiyan, we are calling for their immediate and unconditional release. The responsibility of all the suffering, harassment, beatings, and the situation that they face directly lies with the Iranian government and their security and safety is the responsibility of the security and justice authorities. We are deeply and increasingly more concerned about their lives and call all Haft Tapeh Workers, Iran and the world, and all the world’s working groups, the media and related institutions for their immediate, practical, and maximum support for the release of the Ismail Bakhshi and Sepideh Gholiyan, as well as one of the members of the Haft Tapeh Sugar Cane Workers Syndicate, Mr. Ali Nejati.”

Haft Tapeh workers’ protests intensified since November 5th, 2018, during which a large number of labor activists were arrested or summoned. Some have been released on bail.

Among the people still in custody are Ismail Bakhshi and Ali Nejati, former chairman and members of the Haft Tapeh Sugar Cane labor union, as well as his son Peyman.

So far, a large number of human rights activists and various institutions have issued statements calling for the release of detainees and supporting the protests of these workers.

Protest workers argue that there are only two ways to resolve this crisis: “Firstly, the Haft Tapeh must be run by a self-governing labor movement, or, if the government manages it, all things must be under the control of the workers’ council.”

The Haft Tapeh workers have been protesting their livelihood and job insecurity for 26 days.

The Haft Tapeh Sugar Cane Industry Complex was handed to two private companies, Zenus and Ariak, in 2015. Since then, the workers have protested more than 300 times.