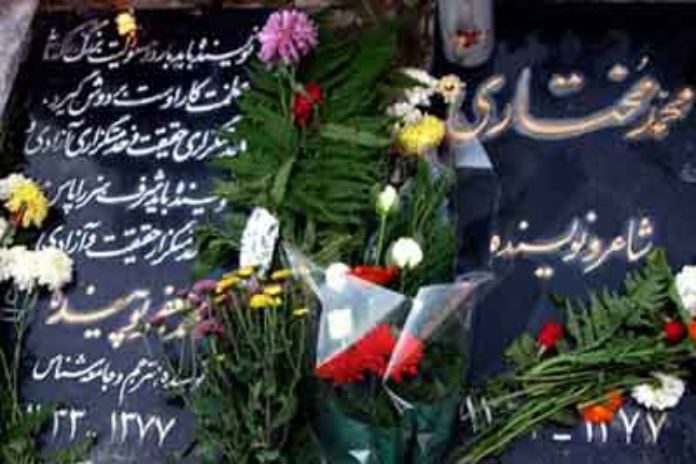 Today, Friday December 7th, 2018, security guards prevented the Mohammad Mokhtari and Mohammad Jafar Poyandeh’s 20th killing anniversary memorial at the Imamzadeh Tahir Cemetery in Karaj. These two are the victims of the chain murders of Iran.

According to the Campaign for the Defense of Political and Civil Prisoners and a statement by the Iranian Writer’s Association, on Friday, December 7th, 2018, a group of writers, artists, civil activists and a number of citizens living in Tehran and Karaj gathered at the Imamzadeh of Taher in Karaj to attend the 20th anniversary memorial of Mohammad Mokhtari and Mohammad Jafar Poyandeh, two of the victims of Chain Murders of Iran, but security guards prevented the ceremony by closing the doors of the Imamzadeh cemetery.

Security agents blocked the commemoration at Mohammad Mokhtari and Mohammad Jafar Poyandeh’s tomb at the Imamzadeh Tahir Cemetery in Karaj.

Reza Khandan Mahabadi, a director and member of the Iranian Writers’ Association, said to the campaign: “We were supposed to go there with our friends at 3 o’clock, but there were large number of security forces and guards and the doors were closed. We inevitably gathered in a corner, and as much as we tried to persuade them to open the doors, they ultimately refused and told us “we have an order that the doors should not be opened and that the ceremony should not be held.”

Mr. Khandan added, “This is a situation that has been established for us, but we have this tribute and justice which we repeat. Eventually, in one place and with a fair trial, these Chain Murders cases should be opened, and the commanders and perpetrators of these killings should be identified and receive a fair penalty. This should become an experience, for every society, so that these behaviors are not repeated, and the crimes committed are not forgotten. “

On Wednesday December 5th, 2018, on the eve of the 20th anniversary of political assassinations, the Iranian Writers’ Association wrote, “This autumn is the 20th anniversary of the fall of the fall of 77. Hamid Hajizadeh and his 9-year-old son Karoon, Majid Sharif, Parvaneh Eskandari, Dariush Forouhar, Mohammad Mokhtari and Jafar Poyandeh are among those who were killed only in the fall of 1998. However, the “physical removal” of critics and opposition lasted for years. “

The Iranian Writers’ Association announced: “On Friday, December 7th, at 3 pm, we will gather together and commemorate at the graves of Muhammad Mokhtari and Mohammad Jafar Poyandeh at the Imamzadeh Taher Cemetery.”

The Iranian Writers’ Association was created in April of 1968 with the purpose of combating censorship. The members of the association were faced with oppression, execution, and murder at different times of Iranian history, both during Pahlavi times and during the Islamic Republic, especially in the 1980s and 1990s.