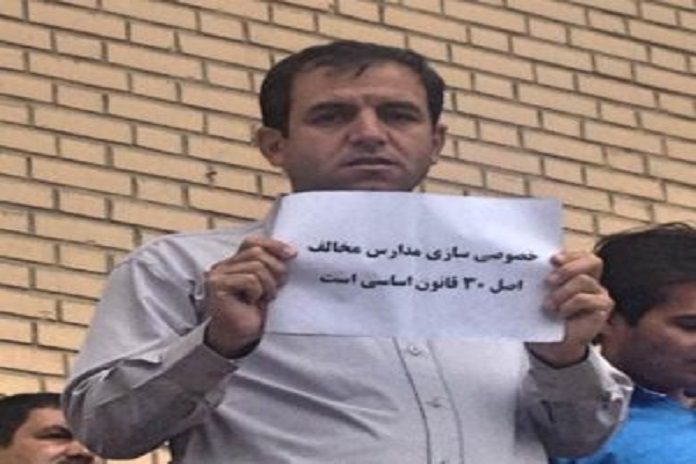 The first branch of the Revolutionary Court of Sanandaj, headed by Judge Saeedi, sentenced Omid Shahmohammadi, a teacher and civil activist, to prison.

According to the Campaign for the Defense of Political and Civil Prisoners, Omid Shahmohammadi, a teacher and activist of the Divan Valley teachers who was arrested by Revolutionary Guard Intelligence forces one day before the November general protest, was sentenced to one-year imprisonment by the first branch of the Revolutionary Court of Sanandaj on the charge of “action against national security”.

On Monday, November 12th, 2018, one day before the start of the second round of teachers’ strikes in Iran, security officials entered Omid Shahmohammadi house without a court order, searched the house, and seized some of his personal belongings. After, they arrested him and transferred him to the Sanandaj Revolutionary Guard Intelligence detention center.

Omid Shahmohammadi was temporarily released on December 20th, 2018, after 39 days of detention, by providing 100 million Tomans in bail.

The Association of Teachers of Kurdistan issued a statement on November 17th, 2018, and condemning the arrests, threats, and mass summoning of teacher activists and educators, and warned against an increase in the wave of these arrests.