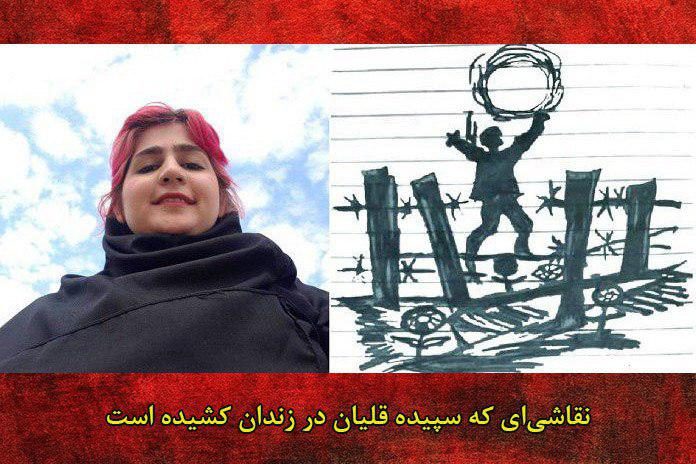 Sepideh Gholiyan, a detained civil activist who was transferred from the women’s ward of the Evin Prison to the Gharchak Prison of Varamin, on June 3rd, 2019, in a letter from the prison, detailing this transfer and her descriptions of her situation. The civil activist was transferred to Evin Prison on Sunday, April 18th, 2019, at the request of the Islamic Republic’s security officials, along with Ismail Bakhshi, the labor activist, and Amir (Ali) Amirqoli.

According to Radio Zamaneh, Sepideh Gholiyan wrote in her letter, “Monday morning, on June 3rd, 2019, the head of the ward in Evin Prison summoned me to report horrible news. Even though in recent months I’ve received lots of terrible news, I was trembling at the idea that this could have been news of a car crash with my family while traveling the route e Dezful-Tehran to see me.”

She continued: “The world of a prison is a world of ignorance. A prisoner “exists” while also being “nonexistent”, because often there is no knowledge of what is going on beyond the walls of the prison. As a result, even good news can turn out to be bad news for the prisoner. For example, on that particular day, the telephone system was not working. By the assessment of the prison ward’s authority, the bad news was the decision to transfer me from Evin Prison to Gharchak Prison in Varamin. A previous prisoner in another prison spoke about the inhumane and intolerable conditions of the prison, which is so severe than even in the eyes of prison authority he is seen as a prisoner of torture and banishment. But, after suffering in numerous prisons, with so many days filled with pain, torture, and interrogation in the Ministry of Intelligence solidarity confident cells, and after being transferred to Evin Prison, the news of being transferred to Gharchak of Varamin isn’t so bad.”

After re-arresting Sepideh Gholiyan on Sunday morning, January 20th, 2019, a case with four charges was created for her. These allegations include “propaganda against the system”, “community and collusion to commit a crime against national security”, cooperation with established groups”, and disturbing public order”.

Ismail Bakhshi, Amir Amirgholi, Sanaz Al-Hilary, and Amirhasan Mohamadifar are among the other defendants in the case. The defendants received their defenses in the absence of any lawyers in the Seventh Branch of the Tehran Revolutionary Court, based in Evin Prison. Branch 15 of the Tehran Revolutionary Court, headed by Judge Abu’l-e Sabah will review the cases for Gholiyan and a few other defendants. Judge Salavati is famous for issuing heavy sentences for civil and human rights defenders.

Regarding these days, in her letter from Gharchak prison in Varamin, she wrote, “Prison is prison and a prisoner is a prisoner! A prison officer said that with the decision for the prosecutor and also to take care of me, they will transfer me to Gharchak Prison in Varamin. This means that the the judiciary and the upstream institutions know exactly what is happening here- that prisoners lack basic facilities, is constantly under heavy pressure, and is bombarded with insults and humiliation. Now that I am a prisoner in this place of banishment, I am reflecting on what has happened to me from November 2018 to the present. Inhumane detention, torture, false accusations, solitary confinement, broadcasting the forced confessions, beatings, and arrests of my family members and myself, prisoner to a prisoner, and imprisonment to another prisoner. “

Sepideh Gholiyan wrote: “From November 27th, 2018, to the present day, everything has been like an unrealistic nightmare, but unfortunately it is painful and real. What have I done that government’s judicial and security institutions have been planning to put an end to my life? The security authority is looking for several victims to blame for the massive protests of the Haft Tapeh workers so they can tell their leaders that the crisis is under control. By proving their loyalty to capitalism and their leaders, these security agencies are not evading any oppression against the protestors. But the crisis is not under control! The experience of being relocated throughout several different prisons has made me realize that the current situation of the economy is critical and the cause of the catastrophic livelihoods of the lower class.”

Gholiyan further described her interactions with various prisoners. When she talked to prisoners without knowing their charges, each one came to a painful epiphany at the end of the conversation that the current economic crisis has destroyed a lot of lives.

“After Ismail and I talked about our torture, they broadcasted our forced confessions to break us. Apparently, this move did not satisfy the security authorities, and we were arrested for the second time. At least I am confident in myself when I say I have endured many torture sessions after my arrest. Absolute uncertainty for more than three months during my interim detention, the multiple transfers between jails, and repeated humiliations and threats have only been part of this torture. They torture us until we forcefully accept their claim that we have not been tortured! But the fact is that from November 2018, to present time, we have been tortured every day.”

Sepideh Gholiyan, insisted that she is still resisting: “The truth is that the news of the transfer to Gharchak Prison in Varamin has only strengthened my resistance and mood, because the authorities of the current situation are disappointed with moving me even to Evin Prison. The guardians and keepers of the status quo dos not understand that until the deep gaps in our economy and society are closed, the protestors will not be silenced. The authorities will not get any results by imposing brutal oppression. Despite all of the brutal pressure on me, I am still resisting. The more days that I spend in prison, the more I believe in the truth of my voice and objections. My rejection is in relation to the resistance of all those who have not bent to the pressure and repression.”

At the end, Gholiyan reiterated her resistance and wrote, “I stand because the deep economic and social crisis that made me protest is still there, and not only has not been resolved, but it has intensified.”