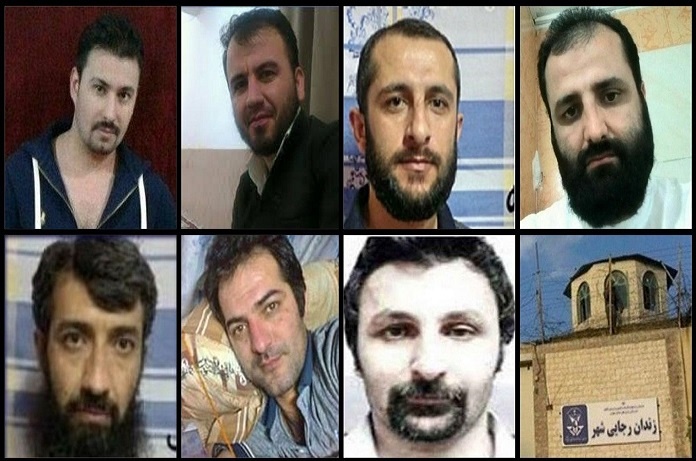 According to the Campaign for the Defense of Political and Civil Prisoners, on Monday, February 3rd, 2020, the death sentences for seven political prisoners detained in Rajai Shahr prison in Karaj named Anwar Khazri, Kamran Sheikhah, Farhad Salimi, Qassem Abesteh, Khosro Besharat and Davood Abdollahi was uphold by the Supreme Court chair by Judge Razini. Defendants’ defense lawyer, Alizadeh Tabatabai, has been notified.

According to the report, the trial of their case was held in Branch 15 of the Revolutionary Court presided over by Judge Salavati on Monday, June 17th, Tuesday, June 18th, and Wednesday, June 19th, 2019. They were sentenced to death for the second time.

According to the letters, suffering stories, and reports that some of these individuals have released from inside the prison, the sentences of these Sunni prisoners have been obtained solely based on forced confessions and with the use of force and severe torture. There were no evidences to prove the charges in their case.

Previously, Anwar Khazri, Kamran Sheikhah, Farhad Salimi, Qassem Abesteh, Khosro Besharat and Davood Abdollahi were sentenced to death by Branch 28 of the Revolutionary Court chaired by judge Moghasi. The verdict raised objection among prisoners and the case was sent to Branch 41 of The Supreme Court for final approval.  After the case was review by Judge Razini. The verdict was canceled, and case was sent to Branch 15 of Revolutionary court chaired by Judge Abolghasem Salavati for review again.

It has been said that pressure from security forces made the Supreme Court to uphold the death sentence of these 7 prisoners of conscience for second time.

In March 2016, a trial was held in Branch 28 of the Revolutionary Court chaired by judge Moghasi in Tehran on the charges of “acting against national security”, “propaganda against the regime”, “membership in Salafi groups” and “corruption on earth”. The death penalty sentences were formally communicated to them on May 25th, 2016. After the lawyer objected to the ruling, the case was referred to the Supreme Court and was later overturned.

In September 2017, three of these inmates: Khosrow Besharat, Kamran Sheikhah and Anwar Khazri were transferred from Rajai Shahr Prison to Karaj Prison in Urmia Central Prison for their case review session. In July of the same year, their trial was held at Branch 12 of the Urmia Court of Appeal, and the verdict was issued. Based on the verdict, Anwar Khazri and Khosrow Besharat were sentenced to ten years imprisonment for the charges of participation in the murder and Kamran Sheikhah was also sentenced to retribution for murder.