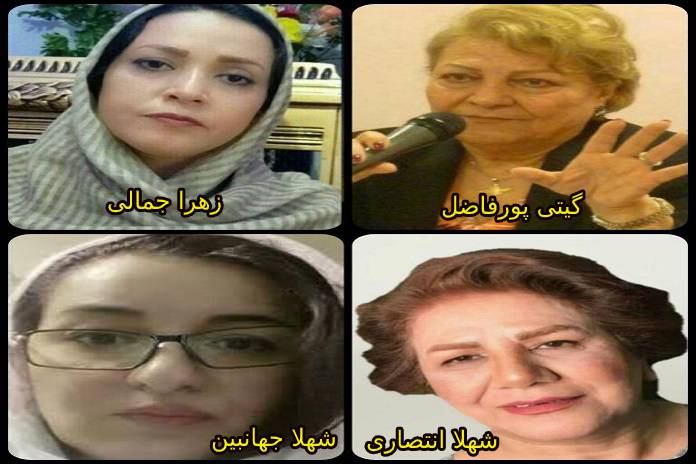 Giti Pourfazel, Shahla Jahanbin, Shahla Entesari and Zahra Jamali, political and civil activists, in connection with a letter requesting the resignation of Ali Khamenei, each sentenced to four years and two months in prison by the Revolutionary Court’s Branch 26 chaired by judge Iman Afshari. The sentencing also includes two years of prohibition of membership in any political and social group.  The trial of these four has been held in October this year, and prison sentences have been issued in November.

According to the report, Giti Pourfazel, Shahla Jahanbin and Shahla Entesari are being temporarily released from Evin Prison on 500 million Tomans bail in November, but  Zahra Jamali is still being held in the Evin Prison.

According to the Campaign for the Defense of Political and Civil Prisoners, based on the verdict issued by Branch 26 of the Revolutionary Court in November, Giti Pourfazel, Shahla Jahanbin, Shahla Entesari, and Zahra Jamali, political and civil activists, were sentenced to 3 and 1/2 years in prison on charges of  “gathering and collusion against the Islamic Republic” and to 8 months in prison on charges of “propaganda against the regime”. Under Article 134 of the Islamic Penal Code, the sever punishment of 3 and 1/2 years in prison for these women will be executed.

Giti Pourfazel, Shahla Jahanbin, Shahla Entesari and Zahra Jamali were arrested by security forces in late August of this year. Their charges were communicated to them by interrogator Nasiri Pour in the Evin Security Prosecutor’s Office’s second Branch.

Ms. Jamali, who was arrested at her sister’s house on Saturday, August 24th, 2019, remains in the women’s ward of Evin prison.

In June, 14 civil and political activists called for a “resignation of Ali Khamenei from the leadership.” The wave of support from individuals inside and outside of Iran for these statements were issued

Following the release of these statements, the wave of arrests began in Iran.