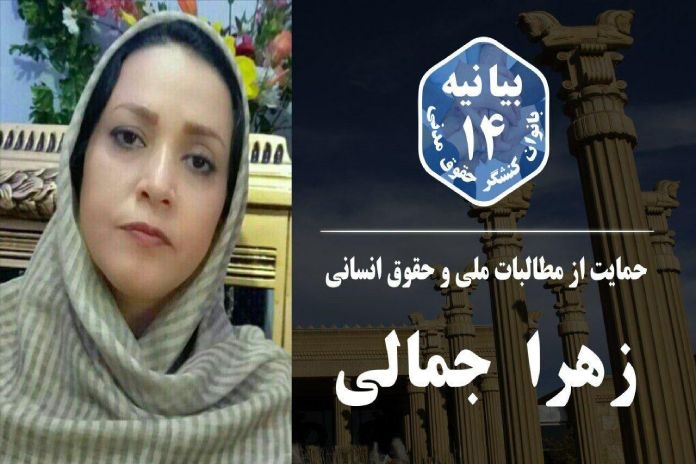 Zahra Jamali, a political prisoner and one of the signatories of the second letter of 14 people (women inside Iran), returned to Evin Prison after end of her temporarily release.

According to the Campaign for Defense of Political and Civil Prisoners, on Sunday November 8th, 2020, civil activist Zahra Jamali returned to Evin prison. She was previously sentenced by Branch 26 of the Revolutionary Court to three years and eight months in prison, and was released temporarily on Sunday, November 1st, 2020.

“Zahra Jamali” was arrested by security agents at her sister’s home and taken to an unknown location on August 24th, 2019.

During her arrest, her sister’s home was searched, and her cell phone was confiscated.

The civil activist was initially sentenced by Branch 26 of the Revolutionary Court, presided over by Judge Iman Afshari, to five years in prison on charges of “conspiracy against the Islamic Republic” and one year on charges of “propaganda against the regime.”

Due to the lack of a criminal record and no appeal, the sentences were reduced to 36 months and 8 months in prison, respectively.

This political prisoner previously was released temporarily on 400 million Tomans bail on March 14th, 2020. She was returned to the Evin Prison women’s ward on Tuesday, May 26th, 2020, at the end of her leave time.

In May 2020, 14 civil and political activists issued a statement calling for “Ali Khamenei resignation from the leadership.” After that, a wave of support from individuals and personalities inside and outside Iran was formed for the statements. The 14 Women Inside Iran Statement was one of these supports.