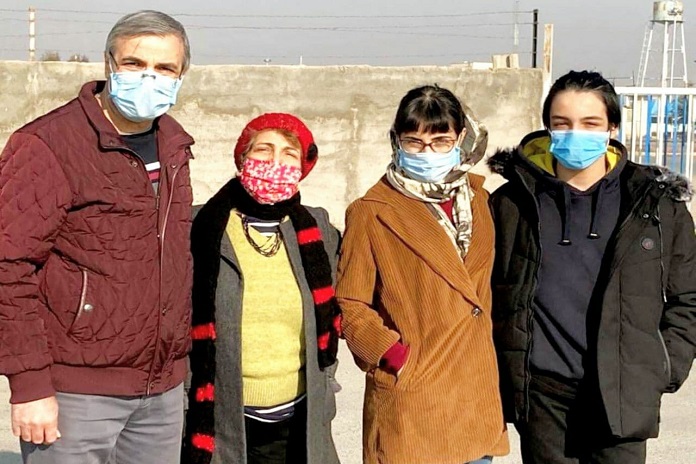 Nasrin Sotoudeh, a lawyer and human rights activist, was sent on a short-term medical leave from Qarchak Prison in Varamin.

According to the Campaign for the Defense of Political and Civil Prisoners, Nasrin Sotoudeh, a political prisoner imprisoned in Qarchak prison in Varamin, following a heart attack, was sent on a three-day temporary release, on Friday, January 8th, 2021.

Earlier, on Saturday, November 7th, 2020, this lawyer and human rights defender was sent on temporary leave from Qarchak prison in Varamin following the consent of the prison supervisor.

Ms. Sotoudeh returned to prison after 25 days of leave, despite suffering from Quaid 19 disease, on the evening of Wednesday, December 2nd, 2020.

Few days after her temporary prison leave, she was tested positive for coronavirus.

The imprisoned lawyer was sent on leave after previously struggling with pain in her left chest and a feeling of stretch from heart to neck.

The complications occurred while she had recently gone on a 45-day hunger strike and had ended her hunger strike due to her physical deterioration and cardiovascular problem.

Reza Khandan, Nasrin Sotoudeh’s husband, had previously stated that, according to the prison doctor, the political prisoner had a very dangerous heart problem.

Nasrin Sotoudeh, a political prisoner, went on a hunger strike in protest of the illegitimate treatment and authorities disregard for the conditional release of prisoners on Tuesday, August 11th, 2020. On Friday, September 25th, 2020, after 45 days, due to her deteriorating physical condition and cardiovascular problem, she announced the end of her hunger strike.

Reza Khandan, Nasrin Sotoudeh’s husband, announced that the political prisoner was diagnosed with a very serious heart problem at the discretion of the prison doctor. However, prison officials were reluctant to transfer Ms. Sotoudeh to the hospital immediately.

The human rights activist while ended her hunger strike, according to her husband, Reza Khandan, she has a history of anesthesia on the second day of the hunger strike, a history of deteriorating on the ninth day of the hunger strike and transferring to prison clinic, and sign of gastrointestinal complications, extreme physical weakness in the foot area (possibility of falling to the ground), dizziness, fluctuations in blood pressure and blood sugar, nausea and inability to consume fluids and sugar (similar to dry hunger strike), transfer to hospital due to hypoglycemia and fluctuations in blood pressure, inability to walk, low eyesight, blurred vision and severe headaches.

Reza Khandan, a civil activist and Nasrin Sotoudeh’s husband, has published an article in this regard and said: “Nasrin has been on a hunger strike for 35 days. Yesterday was visiting day. Although Nasrin has stopped coming for visits for 4 weeks, I went to the visiting room. I talked to Rezvaneh’s wife, whom she had met. I learned from her words that Nasrin’s health is in a disturbingly bad condition. Much worse than what she herself has been trying to show during the phone calls in recent days.”

On August 11th, 2020, at the same time that she started her hunger strike, she released a statement from the women’s ward of Evin Prison, which her husband, Reza Khandan, had posted on his Facebook page.

In part of the statement, Nasrin Sotoudeh recalled the involvement of intelligence and security agencies in the verdicts against the defendants, saying that “Continuing imprisonment during the Corona epidemic and the conditions of the prisoners were impossible.”

Referring to the unfair trial of political offenders, she said in her statement: “The case of political prisoners are created for unbelievable charges of espionage, corruption, acting against national security, corruption and prostitution, and forming an illegal group on the Telegram channel that can lead to up to ten years in prison or a death sentence. Many defendants are denied access to an independent lawyer or unrestricted relation with their lawyer from the beginning of the case until the end of the sentence. The judges of the Revolutionary Court recklessly and repeatedly state to the political defendants that they will issue a verdict only on the basis of reports from the intelligence and security agencies, and the interrogator will tell them the verdict in advance upon the arrest of the defendants.”

This human rights activist and lawyer noted in part in the statement that the rights of detainees, including the court of appeals, parole, suspension of sentences, adjournment of sentences and the issuance of a minimum sentence under the new law, and all depend on the opinion of the interrogators.

Nasrin Sotoudeh earlier with publishing a statement, in protest to authorities preventing the release of political prisoners, started a hunger strike on Monday, March 16th, 2020.

Ms. Sotoudeh part of the statement reads: “It is national necessity that many of the provisions in the country’s prisons, including women’s ward of Evin prison be closed and a need for a national government of reconciliation with the world to the benefits of science and technology to fight the coronavirus”

At the end, this imprison lawyer wrote: “Since all legal and judicial correspondences with officials on the need for the release of prisoners have been fruitless so far, I reiterate my request for the release of political prisoners by going on a hunger strike as a last resort for a prisoner “

She was later told that the reason for her arrest was to serve a five-year prison sentence in a case that she was sentenced in absentia in 2016. Ruling was issued on charges of gathering and colluding to disturb national security referring to sit-in protest in front of the Bar Association.In Nasrin Sotoudeh’s new case, seven charges have been filed, for “gathering and conspiracy to disrupt the security of the country” she was sentenced to  seven and a half years, for “membership in the Legam campaign” to seven and a half years, for “propaganda activities against the regime” to one year and Half, for “encouraging corruption and prostitution” to 12 years, for “appearing without a religious veil” to 74 lashes, for “publishing lies to disturb the public mind” to 3 years in prison and 74 lashes, and on charges of “disturbing order and Public Welfare ” to 2 years in prison.