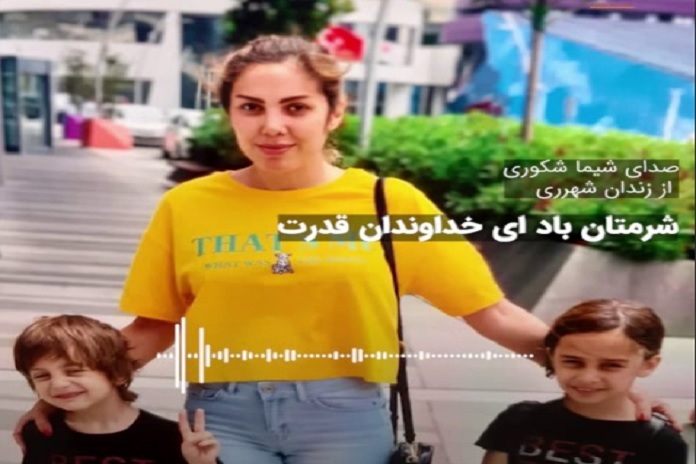 Shima Shakouri, a journalist imprisoned in Qarchak prison in Varamin, has been sentenced to unprecedented and heavy sentences and fines without appearing in any court.
According to the Campaign for the Defense of Political and Civil Prisoners, Shima Shakouri was arrested by security forces in the Turkish city of Trabzon in August 2019 in the presence of her two children and her husband, and was returned to Iran after spending many days in solitary confinement.
According to this report, in the audio file released by Ms. Shakouri from prison, her case was referred to Branch 28 of the Revolutionary Court, headed by her cousin, and then to Branch 36 of the Revolutionary Court of Tehran, citing two photos, and on the charge of Disruption of the system.
The 37-year-old journalist said: Following the publication of an 11-page report on the corruption of 10 economic corrupters and presenting it to judicial officials, and after being arrested in Turkey and returned to Iran, she was sentenced to pay 100 billion tomans fine that is equivalent to 3,000 years in prison.
In this audio file, Shima Shakouri says: “Her case has been convicted without being examined and without being given the right to defend by herself or her lawyer Mohammad Hossein Aghasi.”
She added: “Because she refused to pay a bribe and government officials affiliated with the Commercial Research Institute and the National Security Agency and judicial officers had influence on her case, this verdict was issued for her case.”
Ms. Shakouri said: “The names of those who were involved in the unfair trial of her case have been presented to judicial officials in an 11-page enactment.”
She says that she has been in Qarchak Prison in Varamin for nearly two years, pointing out that her case has been missing for four months and that even the branch has not allowed her to defend herself.
Shima Shakouri added: For what crime, for what sin, and when I was not allowed to defend myself, how was I sentenced to pay a fine of 100 billion tomans, equivalent to 3,000 years in prison?