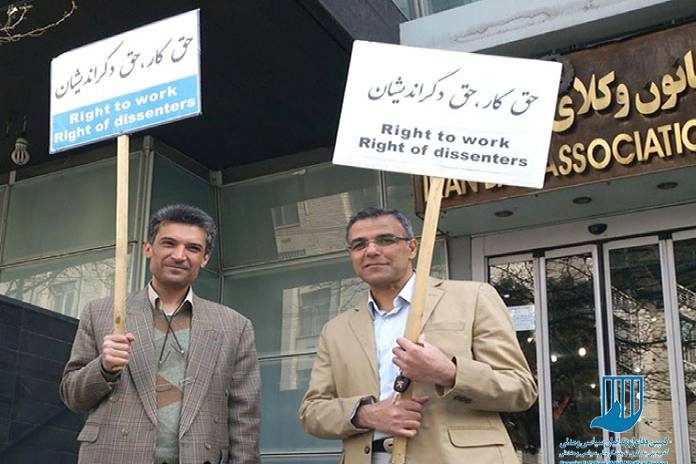 Farhad Maysami, a physician and civil activist detained in Evin Prison, is still in a “serious physical condition” despite ending his hunger strike a while ago.

According to the Campaign for the Defense of Political and Civil Prisoners, Farhad Maysami’s mother met her son on Wednesday, December 26th, 2018 and sais that his physical condition is still urgent and urgently needs medical attention.

Sedigheh Pishinmaz said: “My child is left alone in solitary confinement in Evin Prison without medical treatment or medical equipment, and he is not in a good condition. He should be transferred to the hospital very soon.”

An informed source quoting Ms. Pishinmaz said, “The mother of Mr. Meysemi is extremely worried about her son’s situation and says, “Her son face is very pale and he is just skin and bones. This is due to the effects of his son’s long-term hunger strike. “

On Wednesday, December 20th, 2018, Mohammad Moghimi, Maysami’s defense attorney, reported in a non-public court in the 15th Revolutionary court of Tehran chaired by Judge Salavati. He told the campaign, “A hearing on the charges against two defendants, Reza Khandan and Dr. Farhad Maysami, was held in branch 15 of the Revolutionary Court under the chairmanship of Judge Salavati. The charges were made and we, of course, presented our defenses. The court finally announced the end of the proceedings. We are waiting for a court order to be issued within the deadline.”

Farhad Maysami, a physician and civil activist, was arrested in Tehran on Tuesday, July 31st, 2018. One day after the arrest, he started a hunger strike to protest his arrest and charges. He spent 20 days in solitary confinement in section 209, and was later transferred to Ward 4 (general) of Evin Prison.

Three charges were brought against this civil activist in the Seventh Branch of the Evin Prosecutor’s Office. He was accused of “gathering and colluding in order to disrupt the security of the country by provoking women to appear in the street without their scarfs”, “propaganda against the regime”, and “insulting the veil as one of the sanctities of Islam.” But examples of these three charges are unclear.

On Wednesday, September 26th, 2018, he was transferred from the general ward of Evin Prison in a room near the prison’s health center by force with the use of violence.

Farhad Meysemi, 48, is a civil activist, teacher and doctor. In the 1990s and 2000s, he published textbooks and educational materials, and has participated as a civil activist in recent years in many of the sittings and protests supporting prisoner rights and against the hijab.