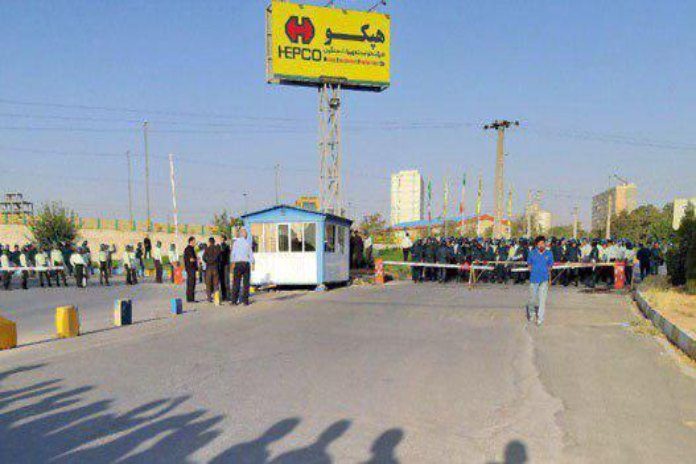 A number of the HEPCO Arak workers were arrested during a rally at Arak Railway Station, on Monday, September 16th, 2019.

On Thursday, September 19th, 2019, HEPCO labor activists announced, “We had 29 detained workers, 21 of whom were released on bail both yesterday and today, eight are still in detention.”

Illna wrote that HEPCO workers have expressed concern over the fate of the 8 workers, who have yet to be released. It is unclear how long they will remain in custody.

HEPCO workers say, “None of the demands and conditions of the new CEO, who was appointed by the government, have been fulfilled. Without fulfilling these demands, HEPCO ‘s ability to continue working and producing are not possible. The company’s shareholders obligations are not clear, the delayed worker wages have not been paid, and there is no news regarding the start date of work and production.”

They insisted, “All the demands of the workers are legal. Some of them are promises that government has already made to the HEPCO group and signed by three ministers but none have been met so far.”

A BBC correspondent also reported that a number of workers at the HEPCO Plant had gathered in front of Arak Prison to pursue the release of detained workers.

Workers at the HEPCO Plant in Arak have rallied in recent days to protest the delayed payment of their wages. The gathering was violent by security forces, on Monday September 16th, 2019. Several protesters were detained, and some were taken to hospital because of injuries.

During the protest, 28 workers were arrested. More than 15 were injured and some of them were taken to the hospital.

HEPCO workers, who had stopped their strike by giving the authorities a six-day deadline, resumed the strike in response to the government’s inaction in response to their demands on Sunday. Workers demand the payment of their wages and the assignment of a major shareholder.

Provincial and Ministry of Industry, Mining and Commerce (SEMAT) officials have changed factory management following a strike in early September. No action has been taken to pay workers’ demands.

After the transfer of factory to private sector, HEPCO Arak workers have repeatedly protested the failure to get their wages paid on a timely basis. Last May and June, workers protested the non-payment wages and work insecurity. These workers went on strike and blocked the Arak railway for several days.

The HEPCO Arak Plant was one of the largest heavy machinery manufacturing and construction factories that started operating in the 1975. After the revolution, the government took over the factory.