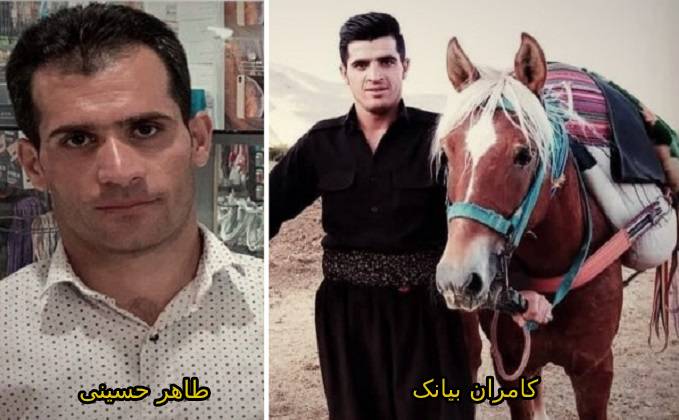 In the past few days, because of the direct firing of the Islamic Republic of Iran’s armed forces, one Kurdish porter and one Kurdish trader were killed in the border areas of Baneh and Piranshahr.

According to news received by the Campaign for the Defense of Political and Civil Prisoners, as well as reports published on social media, on Tuesday and Thursday, November 12th, and 14th, 2019, Taher Hosseini, a porter from the Sadbar village, and Kamran Bianak, a trader and Residents of the “Kohaneh Khan” village were shot dead in the border areas by direct firing of the Islamic Republic’s armed forces.

On Tuesday, November 12th, 2019, Taher Hosseini, were shot dead “by a very close range” of direct firing by the Islamic Republic of Iran’s armed forces stationed in the “Hangeh Jal” border area of ​​Baneh. He was severely injured and died after transferred to hospital.

Also, in another report, on Thursday, November 14th, 2019, Kamran Bianak, were killed because of direct firing by border guards stationed at “Bangin Khan” checkpoint in Piranshahr.

According to local sources, border guards stationed at the “Bangin Khan” checkpoint of Piranshahr in West Azerbaijan province, on suspicion of smuggling and without a warning, targeted a group of porters and traders.  With the fire, Kamran Bianak, 26, was killed by a bullet.

According to a research conducted by the Campaign, border traders, who same as porter, but less frequent, are targeted by the Islamic Republic’s Armed Forces, are sometimes referred to as border traders. Border traders are group of Iranian Kurdish citizens who transport merchants across the borders of Iran and Iraq to make a living. The difference between this group of border traders and the porters is that these people, although do not own the cargoes, instead of carrying the loads on their backs and shoulders, they use cattle (mostly mules and, in some cases, horses) to transport the cargoes.

Of course, in the border areas of Kurdistan, West Azerbaijan and Kermanshah, and among Kurds, the term “border trader”, in addition to the group in question, refers to everyone who trades in formal and informal border markets.

According to reports released by the Campaign and other human rights organizations, since the beginning of this year, tens of porters and traders have died in border crossings as a result of direct firing by the Islamic Republic of Iran’s armed forces.