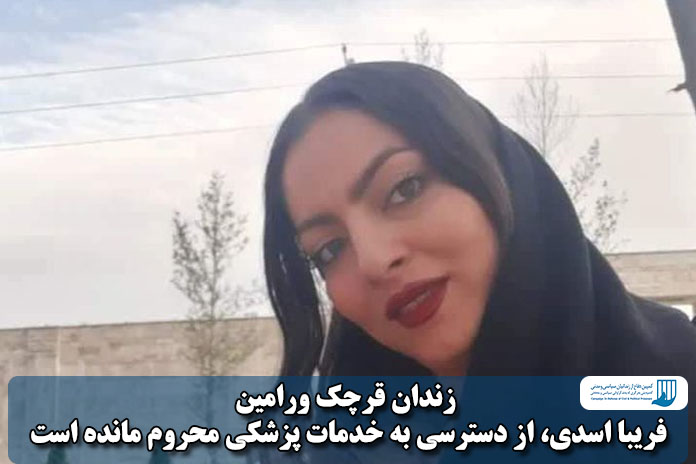 Fariba Asadi, a political prisoner in Qarchak prison in Varamin, has been denied proper medical care despite her poor physical condition. She is serving a one-year prison sentence.

According to the Campaign for the Defense of Political and Civil Prisoners; Fariba Asadi, a political prisoner imprisoned in Qarchak prison in Varamin, was denied proper medical care on Jun 3rd, 2022.

“Fariba is in a very bad physical condition and suffers from heart problems, kidney disease and rheumatism,” said a source familiar with the prisoner’s condition. Despite the prison medical diagnosis that she needed to be sent to the hospital, she is prevented from being sent every day with many excuses.

“Also, the prison health service, with the excuse of not having a budget, only injects pain medicine for this prisoner who needs specialized medical drugs.”

Fariba Asadi, Mehran Delfan Azari, Meysam Gholami and Massoud Vazifeh were arrested by security forces on charges of propaganda against the regime and membership in opposition groups in February 2021.

Fariba Asadi was arrested in her private home in Tehran and transferred to Qarchak prison in Varamin to serve her sentence on January 3rd, 2022.