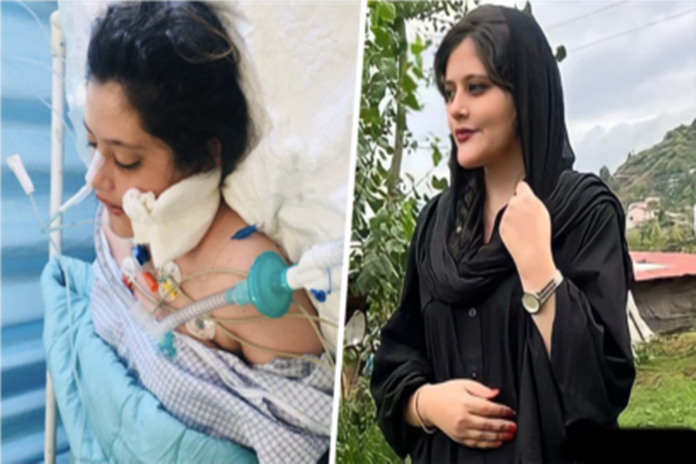 Mahsa (Zhina) Amini, was arrested by the Guidance Patrol) Gasht-e Ershad (in Tehran a few days ago and died suspiciously. The security police have warned her family that her funeral should be held in absolute silence and without side activities.

According to the Campaign for the Defense of Political and Civil Prisoners, the security organizations have put pressure on the Amini family that Mahsa (Zhina) Amini’s funeral should be held without any ceremony and to prevent what they called chaos. It has been threatened that the body of Zhina should be taken to Sanandaj by plane.

Mahsa Amini, 22 years old from Saqez, who had traveled to Tehran with her family, died while in custody on Tuesday, September 13th, 2022.

When she was with her brother at the Haqqani Highway train station, she was arrested by Guidance Patrol) Gasht-e Ershad (forces in Tehran.

It was said that “Mahsa Amini died on Friday, September 16th, 2022, around 10-11 at night in Kasra hospital in Tehran due to severe injuries caused by brain death.”

Guidance Patrol) Gasht-e Ershad (forces transfer Mahsa Amini to the moral security police on Vozara Street, but according to Kiaresh Amini, screams and shouts were heard from inside the building minutes later, and the agents dispersed the worried families with tear gas and batons.

Finally, one of the freed girls confirmed that Mahsa was taken out of Vozara by an ambulance.

Just two hours after the arrest, the doctors at the Kasra hospital declared Mahsa Amini’s brain dead by announcing the diagnosis of simultaneous heart attack and stroke.

Kiaresh Amini says; although he was not allowed to film his sister, he saw bruises on Mahsa’s face and legs!