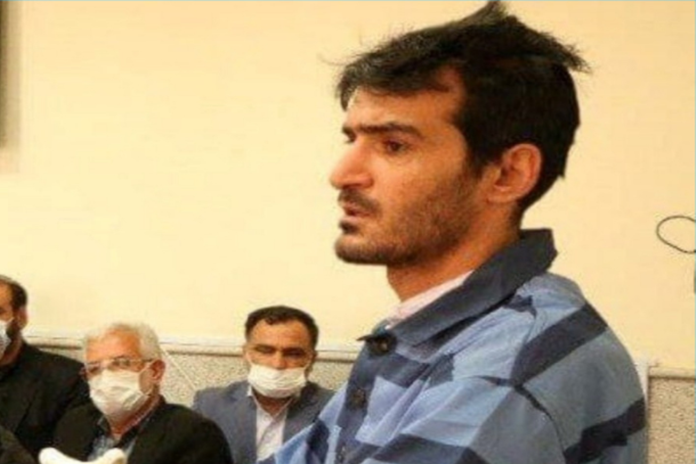 The sentence of Iman Sabzikar Junqani, an armature worker, who was previously arrested for the murder of a police officer and sentenced to death, was executed at the “crime” scene.

According to the Campaign for the Defense of Political and Civil Prisoners; Iman Sabzikar Junqani, a police officer, an armature worker, and resident of Shiraz, the capital of Fars province, was executed on July 23rd, 2022. He was accused of murdering Ali Akbar Ranjbar, a police officer, and was sentenced to death by the 1st branch of the Fars Criminal Justice Department. The verdict was confirmed by Branch 9 of the Iran Supreme Court.

While announcing this news, the Chief Justice of Fars Province said: “On April 30th, 2022, After the completing the orders of the Supreme Court judges, the Forensic Medical Commission announced that after conducting an interview and psychological examination of the accused, he showed no signs of a major mental disorder and according to the evidence, the killer had a clear mind and will at the time of committing the crime.”

He clarified: “After the opinion of the Forensic Medical Commission, the accused was tried for the second time in the first branch of the criminal court of a province, and with the opinion of the judges of the branch, he was again sentenced to death in public.”

This judicial official of Fars Province said in conclusion: “The second opinion of the 1st Criminal Court of Fars Province was confirmed by the 9th branch of the Supreme Court and the case was referred to the execution unit. With preparations, the execution of Iman Sabzikar Junqani’s death sentence was carried out in the presence of the parents of victim’s family at 5:40 this morning at the crime scene.

It should be noted that on March 5th, 2022, Iman Sabzikar Junqani was charged with the murder of Ali Akbar Ranjbar, a police officer, by Branch 1 of the 1st Criminal Court of Fars Province, presided over by Judge Mohsen Rajaeinia and court advisors Mohammad Hassan Sepasdar and Vahid Asadi. In addition to execution, he was sentenced to pay victim’s family, 10 years of imprisonment, 74 lashes for the charge of ineffectual injury to Ali Akbar Ranjbar, and 1 year of imprisonment for stealing a gun. He was also sentenced to pay ransom for the injury caused to the conscript. Quoted from Sedavsima